Why I Marched in Women’s March Los Angeles, Part 1: My Experience

January 23, 2017 · by hoffthebeatenpath · in Events Around Town, Metro Adventures, News, The People of Metro · Leave a comment

Rain came down hard the day of the Presidential Inauguration. The rain and wind on that Friday felt fitting. I made a joke that if I was a religious person, I would probably think that the rain was God’s tears. That was the only joke I could muster all day. It was hard to laugh knowing that we now have a president who has bragged about molesting women, has made threats to our First Amendment rights, and has said other abominable things which make it apparent he doesn’t have the best interests of the citizens in mind. Because of this, I knew I couldn’t be silent while a person like this comes to power. I felt it was my duty to participate in the Women’s March Los Angeles on January 21st.

We had the good fortune of having the march on the one day of the week that was sunny and warm. I quickly got ready and walked toward the Metro station with my protest sign to get to Pershing Square. I immediately saw something very telling as I left my apartment. Many other people carried protest signs as they walked toward the Metro stations, just like I was doing. I wasn’t expecting to see participants near my home.

I get to the Wilshire/Vermont station, and the line to purchase TAP cards is to the corner. At least one hundred people of every walk of life queued up to catch the train. I’ve never seen lines like this. I looked at my Facebook page, and it sounded like this was the scene at most of the stations. I was grateful that I had a loaded card, and I continued on to the platform.

The platform to Union Station was crowded with people carrying signs with various different messages. I enjoyed seeing what other marchers were passionate about. Many had messages supporting Planned Parenthood, some denouncing the president’s cozy relations with Russia. Many others, myself included, carried signs against the demeaning remarks and actions made by our new president. My sign read NASTY WOMAN AGAINST THE MOLESTER IN CHIEF. 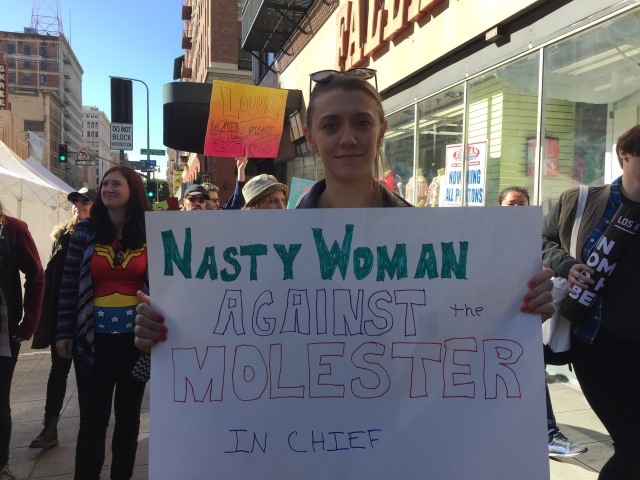 My protest sign, where I proudly proclaim myself as a Nasty Woman Against the Molester in Chief!

The delayed train finally arrived, and it was already full. I’m not sure how I did it, but I managed to squeeze into a full car. I was on the subway near two different groups of mothers with their daughters. One was a mother with her two young daughters. She told me that she still hasn’t found a way for her to explain to her kids what our president meant when he said, “grab her by the pussy,” or how to explain that a person like that was elected president. The other family near me was a mother and her two adult daughters. They said they all had a movement during their time which compelled them to attend protests, but this is the first one that the three of them were going to do together.

Trains were at capacity to the Women’s March Los Angeles

Exiting the train at Pershing Square was a challenge. Hundreds of people inched their way toward the escalators. Metro employees were doing a good job of controlling the crowds. One Metro employee stood near the escalator and was letting people board in waves. The crowd was so dense at the top of the escalator that it would have brought up more people than the crowd could handle if someone wasn’t controlling it.

I finally made my way above ground and was overwhelmed by what I saw. People, everywhere! Body to body, we stood and chanted. It took me 45 minutes to make my way to the corner, and that was probably only 20 feet away. Cell phones weren’t working due to so many people using their phones. It would be virtually impossible to meet up with any friends that I knew would be attending. Many marchers were getting restless, but we remained calm by reminded each other that we were here for reasons bigger than us. We had to make sure we would be seen and heard.

Luckily I did find a friend once the crowd started marching. And as we moved our way down 5th St towards Broadway, we came across a third friend. We decided to partake in an impromptu dance party. Some residents of a loft on Broadway put their speakers in the window and blasted dance music to the street. People danced in the windows of the loft and worked up the crowd below. It was beautiful energy. We thought about making our way to City Hall, but other marchers told us it was too packed to hear any of the speakers. But that was fine by me. I wasn’t there for the speakers. I was there for the support and camaraderie.

After a couple hours, we had worked up quite an appetite. My friends and I went to Little Tokyo in the hopes of finding a restaurant without a large crowd. No such thing! Our best bet was the Escondite, and we also found some other friends there. We regrouped, and shared the stories of our experiences.

One friend told me that this was her first march and she felt rejuvenated by seeing so many like-minded people speaking up in support of one another. Another friend, a man, shared with me that he wasn’t sure about participating at first. He didn’t want to take anything away from women in a space that belonged to them. But after talking to family and friends, he realized that this was a march for all who believed in equal rights.

I was overwhelmed by the positive and supportive energy by the group. And I was impressed to hear that there was not one single arrest during Women’s March Los Angeles or any of the other related marches in other cities. We sent a message to the new administration that we will not be silenced, and we will not stoop to their level.

I had some very profound experiences that touched on all of the reasons I was there: rape culture, First Amendment rights, and fighting for the next generations. These experiences are all worthy of their own attention, and I will be writing a separate blog on each of these in the coming days.

Check back soon for my second piece on the Women’s March Los Angeles, where I get a harsh reminder of the ugliness of rape culture.

← Hoff-wiedersehen, NELA! Join me on my farewell ride on the Gold Line
Why I Marched in Women’s March Los Angeles, Part 2: Rape Culture →