October 5, 2015 · by hoffthebeatenpath · in Biking, The Far Corners of LA · Leave a comment

This month marks what would be my sixth year living in the same apartment building in Koreatown–would.  As I mentioned previously, I moved to Northeast Los Angeles a few weeks ago.  It was a spontaneous move, but it was the right one.

I lived in a 1930’s block apartment off of 3rd and Normandie.  It was a beautiful place with a tight-knit community that I was proud to call home.  Neighbors knew one another, and we all had pride in our home.  The block has a high walkability score and was accessible to grocery stores and several bus and rail lines.  With the steep increase of rent in the Koreatown area, rent control had me locked into a rate much lower than market value.  Of course, parking is a nightmare, but as a car-free commuter, that didn’t affect me much.

Over time, the charm of my home began to wane.  The community feel began to deteriorate and crime rates were on the rise.  The hustle and bustle of the dense neighborhood that I once loved began to grate on my nerves, as peace and quiet was elusive.  I considered apartment hunting for a new place, but I would either have to pay much for for a similar apartment or pay the same for less.  Neither option appealed to me.  I felt stuck in a less than satisfying living situation.

Finally, my white horse arrived.  I was chatting with a friend, who recently bought a house in Northeast LA.  She still hadn’t found a roommate, and invited me to check out her place.  It is a charming house on a quiet side street.  There are several bus lines nearby, and the gold line station is less than a mile away.  There are a few markets nearby and many of my close friends also lived in the area.  Additionally, the neighborhood is great for biking. 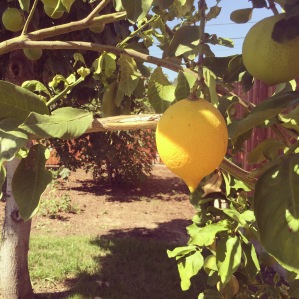 Did I mention we have fruit trees in the back yard?

After seeing the house, I told my friend I’d think about it and let her know before the end of August.  There wasn’t really much to think about!  It seemed that the stars aligned perfectly to make this happen.  I immediately turned in my 30-day notice to my apartment in K-Town and signed on as a NELA resident. 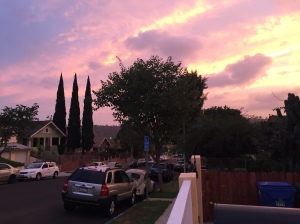 A beautiful sunset from the front yard of my new home.

Of course, the decision to move wasn’t without some sadness.  I moved into this building in K-Town during a formative part of my life.  The six years lived there were probably the most influential with becoming the person that I am today.  I miss my neighbors and the shop owners who always looked out for me.  I miss the swirl of cultures and cuisines that exist in that beautifully diverse neighborhood.

Despite the beautiful parts of K-Town that I miss, I am happy that I made the move.  I am enjoying the bike rides along the LA River and being woken up from the crowing of roosters.  My roommate and her sweet dog have been a pleasure to live with.  I look forward to exploring this historic neighborhood that is now my home.

River Garden Park–one of the lovely parks I see while biking near the LA River in my new neighborhood.

← Has anyone seen these before?
Check out East LA Interchange at NUFF 2015 →