Last Saturday, I joined the Ovarian Psycos and dozens of other women for the fourth annual Clitoral Mass ride.  This is LA’s largest bike ride organized by and for women.  It was a great afternoon of camaraderie and promoting social justice through bicycling. 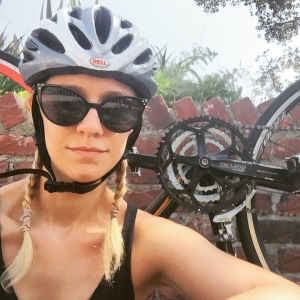 I arrived early at Olvera Street, where the ride was meeting.  Bike mechanics were on hand to help riders with their ABC issues (air, brakes and chains).  Clitoral Mass partnered with the organization Chant Down the Walls for the pre-ride festivities, which included live music and dancing outside of the Metropolitan Detention Center just blocks away from Olvera Street.  A Blessing of the Bikes ceremony followed, which included indigenous rituals.  Stephanie from the People’s Yoga led the group in a series of stretches before the group took to the streets.

Our first pit stop was at Rio de Los Angeles State Park in Glendale.  Volunteers met the riders there with snacks and water.  The park was filled with local vendors selling ice cream and elote, which was great for the warm summer day.  Riders were able to enjoy the small water park and danced to the music being played throughout the park.

We hit the road again through Highland Park and to our second stop at Greayer’s Oak Park.  At this stop, I met a couple of really awesome women who are also writers and live in or near Koreatown.  Hopefully more bike rides and good conversation will ensue from that!

After leaving Greayer’s Oak Park, the ride came across a procession outside of a church in Cypress Park for the church’s patron saint.  Dozens of people walked by carrying trays of food as an offering, and others came dressed in costume.  These are the moments I live for while biking.  Biking brings people closer to the community in a way that driving doesn’t.  It also takes riders down side streets and through neighborhoods where one may not otherwise travel.  I felt so fortunate that the Clitoral Mass riders were able to share this experience.

Procession outside of a Catholic church in Cypress Park in celebration of the church’s patron saint.

Just before our next stop at Lincoln Park, the ride stopped outside of the Central Juvenile Hall to watch an eye-opening performance by the Incarceration Liberation Summer Theater Project.  They performed skits highlighting the injustices of juvenile detention.

After arriving at Lincoln Park, my new friends and I broke off from the group to get some tacos at La Estrella and carry on with the rest of our evenings. Clitoral Mass continued on to Hollenbeck Park in Boyle Heights, and then to MacArthur Park before making its way back to Olvera Street for the final stop.

We had covered a lot of ground during the Clitoral Mass ride and experienced what makes several of LA’s neighborhood unique.  The Ovarian Psycos did a great job with putting together the ride and made sure no rider was left behind.  The only change I would suggest for next year’s ride would be to shorten the amount of time we spent at each pit stop so riders’ muscles don’t cool down too much and cause cramping.

I can’t wait for next year’s Clitoral Mass ride!

Cheers to Jessica Langlois for graciously allowing me to use her Instagram photos for this blog.