Halloween weekend is great.  I love putting on costumes or face paint and having fun.  This year, Halloween landed on a Friday with Dia de Los Muertos celebrations throughout the weekend.  Los Angeles does it right.

This week, I will be posting three blogs about each day of the weekend I had filled with celebration.  Today’s blog is devoted to Friday, Halloween.

To kick off the Halloween spirit, I dressed up as a flapper for my work party.  I was really surprised to see I was the only person in costume riding the bus.

The streets of DTLA felt like a Halloween party all day. I love it!

I decided to spend Halloween night at the Redwood Bar & Grill, where my friends’ band, Pu$$y-Cow, was performing a set as the Cramps.  I went as I dream of Jeannie this year.  I think this is the second best costume I’ve had (my Lelu from Fifth Element costume from 2013 will always be the winner). 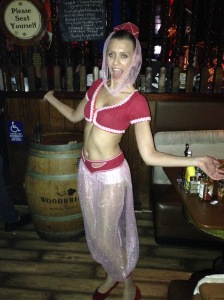 You have three wishes! Photo by Samantha McBride

My plan was to get to the Redwood via Lyft.  By the time I tried ordering a car around 10:00, everyone in Los Angeles was doing the same.  At first, no drivers were responding.  Shortly, the server got busier and unavailable.  I even got desperate enough to call for a cab, but no luck after being on hold for 20 minutes.  Fortunately, the rain ceased long enough for me to catch the bus into DTLA.  Metro to the rescue!

Pu$$y-Cow’s performance as the Cramps is incredible.  Lead singer Joe Dana’s performance evokes Lux Interior down to the smallest detail.  Plus, his legs look better than mine in heels (maybe).

Check back later this week, as I continue my series about Halloween and Dia de los Muertos weekend in Los Angeles, as experienced through me.